Harry Potter and the Sorcerers Stone (2001)

Synopsis
HARRY POTTER AND THE SORCERER'S STONE is an adaptation of the first of J.K. Rowling's popular children's novels about Harry Potter, a boy who learns on his eleventh birthday that he is the orphaned son of two powerful wizards and possesses unique magical powers of his own. He is summoned from his life as an unwanted child to become a student at Hogwarts, an English boarding school for wizards. There, he meets several friends who become his closest allies and help him discover the truth about his parents' mysterious deaths at the hands of a powerful adversary.

Comments
The books have sold 110 million copies around the world and have generated more frenzy than any other in the history of publishing, making the filming of Harry Potter's adventures a difficult and daunting task. Although the project appeared to be commercially invincible, there was always the underlying fear that the film would never live up to the expectations of a child's imagination.
The film faced the challenge of encompassing both the suburban world of the Dursley family, where Harry learns that he is the orphaned son of two wizards and therefore a wizard himself, and the world of Hogwarts School of Witchcraft and Wizardry, where he learns wizarding skills and becomes a broomstick-riding star at the game of Quidditch while battling the evil Voldemort, his parents' murderer.

Thanks in large part to the determination of the director, Christopher Columbus, to stick as faithfully as possible to the book, Harry Potter and the Philosopher's Stone succeeds triumphantly in meeting this challenge.
When Steven Spielberg turned down the director's job in order to make A.I., the choice of Home Alone filmmaker Columbus over other candidates such as Ivan Reitman, Brad Silberling and Terry Gilliam initially came in for criticism from Harry Potter fans. Many felt Columbus's tendency towards sentimentality - as demonstrated in Stepmom and Bicentennial Man - would be highly unsuitable for the weird and wonderful world of Harry Potter. But he has managed to keep the saccharine to a minimum, and instead allows Rowling's story to unfold almost exactly as she wrote it.

From the opening scene, in which an owl flaps slowly down Privet Drive as Professor Dumbledore (Richard Harris) and Professor McGonagall (Maggie Smith, sounding remarkably like Miss Jean Brodie) await the arrival of kindly giant Hagrid (Robbie Coltrane) with the infant Harry, we know that we are in good hands.
Daniel Radcliffe, who played young David Copperfield in the BBC production, is in almost every frame and is a wonderful Harry, often bemused but always determined to do the right thing, while his two friends, the loyal Ron Weasley and the bossy Hermione Granger, are admirably played by Rupert Grint and Emma Watson, neither of whom has any previous acting credits. 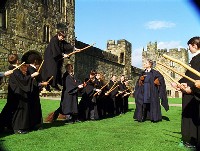 Production designer Stuart Craig, who won Oscars for Gandhi and The English Patient, has created some sumptuous settings, in particular Diagon Alley, a memorably teeming street of shops where Harry buys his school supplies and, with the aid of the genial Hagrid, withdraws money from the stern goblins who run Gringotts bank.
Scenes at Hogwarts, which is first seen in spectacular fashion at night from a flotilla of boats ferrying Harry and his fellow students to the school, were filmed variously at Alnwick Castle, Durham Cathedral, Gloucester Cathedral and Lacock Abbey, and some of the most memorable unfold in the Great Hall. There, at a banquet lit by floating candles, the Sorting Hat decides to which house each student will be assigned. It is there, too, that the mail is delivered by owls swooping down the cavernous room.

But the scene that is certain to emerge, as most fans' favourite will be the game of Quidditch, the filming of which presented a formidable challenge.
"The bludgers are up!" yells the excited commentator and, in an airborne stadium with golden goalposts 50ft in the air, two teams of seven players zoom wildly around on broomsticks, swooping and weaving as they try to dodge their opponents' missiles while at the same time trying to score goals.
For seven minutes the game captivates and enthralls as Harry, riding a Nimbus 2000 broomstick, attempts to catch the Golden Snitch and win the game for Gryffindor House. Bodies thud to the ground as players fall or are knocked from their broomsticks; an attempt to neutralise Harry's flying skills is daringly foiled by Hermione and the right team eventually wins. As in the book, however, the story turns darker as Harry, helped by Hermione and Ron, is called upon to use all his powers to overcome Voldemort.

On November 16, the day Harry Potter and the Philosopher's Stone opens, production begins on the sequel, Harry Potter and the Chamber of Secrets, which will feature the same director and main cast, with the addition of Kenneth Branagh as the vain and boastful Gilderoy Lockhart. Steven Kloves has almost finished the script for the third episode, The Prisoner of Azkaban, and it is safe to assume we will eventually see films of the whole seven-book series Rowling has already planned.
Ron Weasley tells Hermione when she demonstrates her magical talents: "You're a little scary sometimes. Brilliant, but scary." The same could be said of the Harry Potter phenomenon.